After almost being late for work today because of yet another lobotomized driver, it's time for a good old-fashioned whine. :up: Warning: this post contains profanity and a bad attitude. :p Please don't take it too seriously. 🙄 Hehehehe! :p

Some truisms about driving:

Whew! Now that those self-evident truths are out of the way, I can get on with things.

Here in the southern US, we have a bad reputation as being "Southern Drivers"®. People from other places assume we all drive like we really have nowhere to go and are overly slow and timid on the road. The term "Sunday driver" comes to mind. There is some truth to this, as many stereotypes do contain a germ of reality, but it doesn't apply to this boy, BUCK-O! My father taught me to drive before I could even see over the wheel, and my official driving instructor in high school was a somewhat psycho ex-Marine. All this made for some very solid driving skills! 😆

I've driven in many regions of the USA and in several foreign countries. I have handled Mexico City and Los Angeles, no problem. I can drive a tiny English two-seater up to a ten-ton truck. I can tow a trailer. F**k motorcycles. :devil:

Now, we must move on to the issue at hand which is making an unprotected left turn with oncoming traffic. This lesson assumes you are in a place where you "drive right". It is correct that in England, and some other places, they drive on the *wrong* side of the road. Every day I see more and more "people" messing this left turn up. The fatal error is sitting behind the line and not pulling out into the intersection. The light turns green, the dumbass sits there. The light turns red, and the wimp is still sitting there. Nobody made a left turn. Not one.

When the light turns green, not the green arrow, but just plain old green, you pull your jalopy OUT INTO THE INTERSECTION. You don't go to the center of the intersection, that would cause trouble for a left turner on the other side, but you get your ass out there! MOVE IT!

NOW, it will help to refer to the diagram below. You are in a car where there is the red "X". You see that thick white line just above the red "X"? That's called the "stop bar". Say it along with me: "STOP BAR". As long as you have your vehicle beyond that line before the light turns red, you HAVE NOT run a red light, even if the light turns red-as-hell while the oncoming traffic clears for your turn. Sometimes two cars can get beyond that line while waiting for a break in the oncoming traffic. AT LEAST ONE CAR gets to turn left every time the light cycles, preferably two can go, sometimes TEN, hehe. 😀 Sitting behind the stop bar while waiting to turn means you are not ready when there is a break in the traffic and nobody gets to go. Using that method, with enough oncoming traffic, you could conceivably sit there for the rest of your life.

Anyway, getting back to driving to work this morning, I was behind a Toyota Camry (more on those later) that sat through two cycles of a red light without turning left. I could see the dumbass twitching behind the wheel probably fretting that he might never make this light, and the way he was driving, he might not ever. After he sat through one cycle, I gave the polite "short double toot". After the second cycle, I gave the more ominous "single long blast". At the third cycle, I just held the button down. The horn in my work truck is very loud. :devil: Both he and the wretched-looking passenger were spinning their heads around like beachballs atop a finger rather than trying to once again make the turn. Due to being in a company labeled vehicle, I stopped just short of yelling out the window or giving "the finger". 😀

There! I feel better after my whine. Now we all know how to do this, right? Wait, no, only I really do. (See the truisms above). :p

Coming up soon: how to quickly assess another driver with 100% accuracy using only their appearance and that of their car. 😆 Also coming up: how not to screw up the interstate highway on-ramp. Hint: floor it baby! 😀 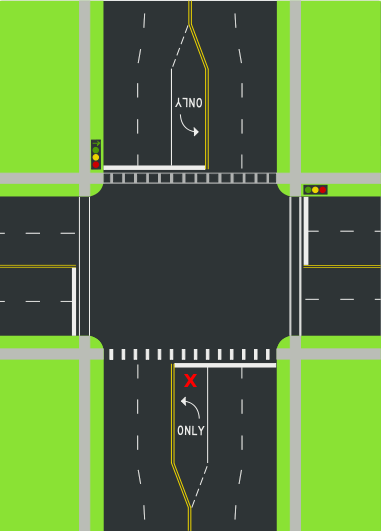