The desktop liked to crash sometimes when coming out of a screensaver, or sometimes even randomly, but the most annoying issue was the flash plugin. When coming out of full-screen flash video, the plugin would freeze the screen or crash it back to a log-in prompt. We have to have full-screen video here for, you know, those Gaga dance videos with earth-shaking sound.

I sometimes run the free flash plugin, called Gnash, which has no freeze/crash issues, and works great on Youtube. The drawbacks are that it doesn't work everywhere, and in full-screen playback, it runs a tad slow making it hard to study those dance manoeuvers.

Anyway, swapping out the operating system is easy now that I finally got my partitioning scheme the way I want it. Putting the "/home" directory in a separate partition is a real time and effort saver. If re-installing or doing a distro swap, you set the partitioner to not format the home partition and mount it as "/home". That saves all your stuff, and you're off and running in short order.

It all gives me something to do, I learn a few things along the way, and I view it as total fun. 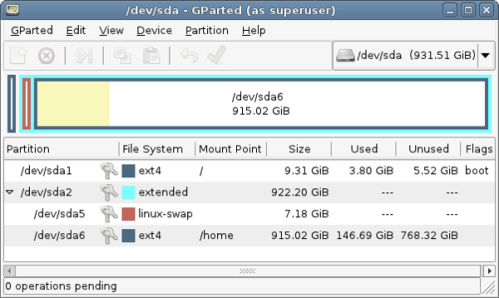